“Girls! Girls everywhere! Girls in the passages, girls in the hall, racing upstairs and scurrying downstairs, diving into dormitories and running into classrooms, overflowing on to the landing and hustling along the corridor — everywhere, girls! There were tall and short, and fat and thin, and all degrees from pretty to plain; girls with fair hair and girls with dark hair, blue-eyed, brown-eyed, and grey-eyed girls; demure girls, romping girls, clever girls, stupid girls — but never a silent girl.”

(Angela Brazil, The School by the Sea) 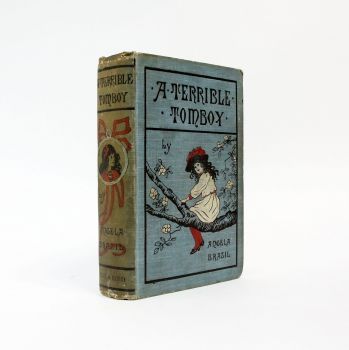 An early, signed Brazil novel, A Terrible Tomboy. Though not strictly a school story, it is semi-autobiographical and features school elements.

The genre and formula of the girls’ school story is a familiar, well loved one, still read by all ages and exerting a strong influence on modern writing today. Its history can be traced all the way back to the 1700s and Sarah Fielding’s The Governess, or The Little Female Academy, which is not only credited as the first school story, but also as the first full length novel for children. This is particularly remarkable as books aimed at girls were especially unusual at the time. The Governess sees its school’s nine pupils tell their own life stories, read together, and learn moral lessons and good behaviour, which is the ultimate theme and aim of the book. 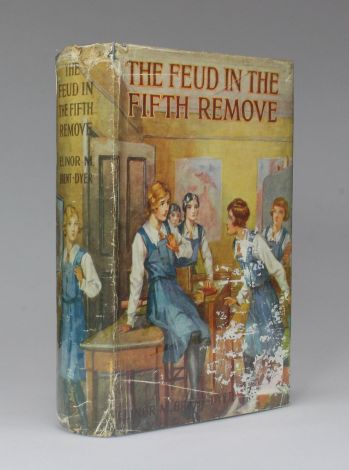 The Feud in the Fifth Remove, an early Brent-Dyer standalone school story.

This emphasis on instructive, moralistic, often religious tales in girls’ school stories (which surged in popularity in the late 1800s) was de rigueur until the early 20th century when Angela Brazil, the original pioneer of the modern incarnation of boarding school fiction, arrived on the scene. While Brazil’s work may seem tame or stuffy or simply a jolly-hockeysticks cliché to today’s average reader, in her time it was somewhat groundbreaking and even rebellious. Some people of a more conservative leaning even condemned them as dangerously subversive, and there are accounts of headmistresses banning the books outright. The stories served primarily as entertainment rather than as moral instruction, and the multifaceted, sporty young female characters (usually aged around 14 to 15) weren’t unfamiliar with a bit of trouble, pranks, and flouting of authority; even their vocabulary, which seems quaint today, was full of contemporary, indecorous, youth-led slang. 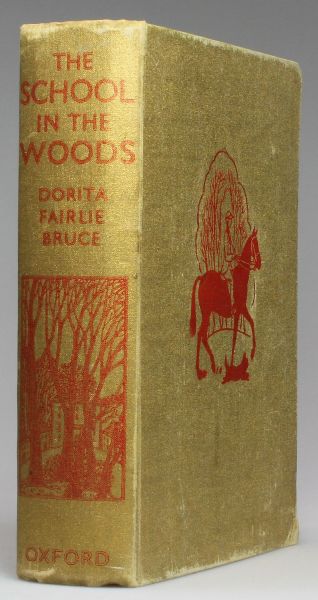 The School in the Woods by Dorita Fairlie Bruce.

Following closely after Brazil were Dorita Fairlie Bruce, famous for her Dimsie series; Elinor Brent-Dyer with the hugely popular Chalet School series; and Elsie J. Oxenham with her slightly more Christianity-influenced The Abbey Girls series; with Enid Blyton carrying the popularity of the school story into and past the mid-20th century with Mallory Towers and St. Clare’s. All of these authors use the school setting (the schools and lessons themselves hold varying levels of importance from series to series) as a way of giving the young female characters stardom and autonomy within the novels. They create an almost mythical world, largely free from adults and populated and driven by girls; their structured, insular societies within a society held together by female friendships and relationships simultaneously provide freedom and adventure and safety and security. 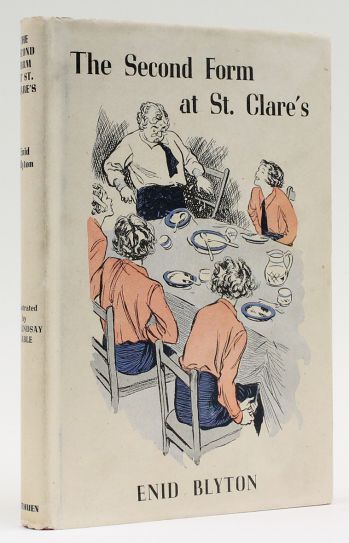 The Second Form at St. Clare’s by Enid Blyton.

For these reasons the boarding school setting has appealed even to authors that write outside of the classic school story formula, particularly as a way to frame and facilitate the trials of adolescence and the hypnagogia of emergent adulthood. An early example is Frances Hodgeson Burnett’s A Little Princess, in which Sarah Crewe and her friends experience upheavals and hardships but ultimately emerge as improved and well-adjusted individuals together within the community of a girls’ school. The otherworldly, isolated image of the boarding school has also lent itself to surreal, supernatural additions in later decades, such as Penelope Farmer’s Charlotte Sometimes, a dreamy time travel novel that sees a 1970s schoolgirl swap places back and forth overnight with a former pupil whom her bed belonged to in 1918, or the gothic The Moth Diaries published in 2002 which, although thematically the near antithesis of the earliest school stories, uses the same boarding school world-structure of insular adolescent female freedom to deal with obsession and sexuality along with implied vampirism.

As each wave of boarding school books influences the following generation of writers, the genre adapts and continues: the most notable modern jump-starter of course being J. K. Rowling with the co-educational magical boarding school Hogwarts, but the setting has also attracted authors like Jacqueline Wilson and John Green, showing that the near-imaginary, child-ruled world provides the perfect backdrop for stories that are funny or serious, sexy or staid, realistic or fantastical, and captures readers with a nostalgic but ever-adapting, enduring appeal.

Published March 30, 2020 by Poppy Connor-Slater . Filed under General . 0 comments in the discussion.